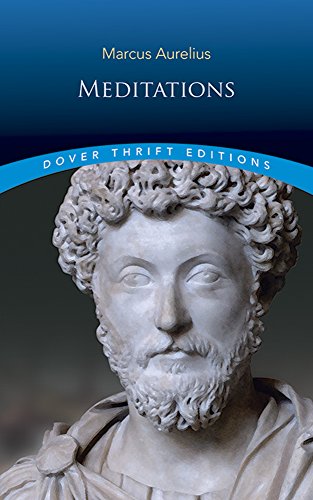 One of the world's most famous and influential books, Meditations, by the Roman emperor Marcus Aurelius (A.D. 121–180), incorporates the stoic precepts he used to cope with his life as a warrior and administrator of an empire. Ascending to the imperial throne in A.D. 161, Aurelius found his reign beset by natural disasters and war. In the wake of these challenges, he set down a series of private reflections, outlining a philosophy of commitment to virtue above pleasure and tranquility above happiness.
Reflecting the emperor's own noble and self-sacrificing code of conduct, this eloquent and moving work draws and enriches the tradition of Stoicism, which stressed the search for inner peace and ethical certainty in an apparently chaotic world. Serenity was to be achieved by emulating in one's personal conduct the underlying orderliness and lawfulness of nature. And in the face of inevitable pain, loss, and death — the suffering at the core of life — Aurelius counsels stoic detachment from the things that are beyond one's control and a focus on one's own will and perception.
Presented here in a specially modernized version of the classic George Long translation, this updated and revised edition is easily accessible to contemporary readers. It not only provides a fascinating glimpse into the mind and personality of a highly principled Roman of the second century but also offers today's readers a practical and inspirational guide to the challenges of everyday life.

One measure, perhaps, of a book's worth, is its intergenerational pliancy: do new readers acquire it and interpret it afresh down through the ages? The Meditations of Marcus Aurelius, translated and introduced by Gregory Hays, by that standard, is very worthwhile, indeed. Hays suggests that its most recent incarnation--as a self-help book--is not only valid, but may be close to the author's intent. The book, which Hays calls, fondly, a "haphazard set of notes," is indicative of the role of philosophy among the ancients in that it is "expected to provide a 'design for living.'" And it does, both aphoristically ("Think of yourself as dead. You have lived your life. Now take what's left and live it properly.") and rhetorically ("What is it in ourselves that we should prize?"). Whether these, and other entries ("Enough of this wretched, whining monkey life.") sound life-changing or like entries in a teenager's diary is up to the individual reader, as it should be. Hays's introduction, which sketches the life of Marcus Aurelius (emperor of Rome A.D. 161-180) as well as the basic tenets of stoicism, is accessible and jaunty. --H. O'Billovich